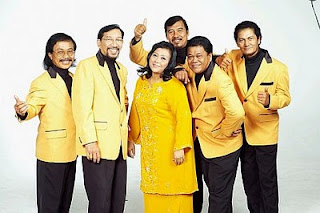 The band formed in Johor Bahru on March 25, 1965 after a meeting at Dato' A Rahman Hassan's father's house, where they all officially agreed to the conditions that Dato proposed. That night, it was a Thursday as Dato' recalled, they decided that they were going to form a proper group. Then, they decided the roles of the band members (not only what instruments they would play, but what aspects of "band business" each member was responsible for.) Dato' was unanimously elected as leader of the group. Two other things were decided that night: that they would give the band a Malay Name - Orkes Nirwana, and that they would "give priority to Malay songs."

According to Dato' A Rahman Hassan, the members had all, for the most part, attended the same classes in school together and often recited the Q'aran together. The group had a good foundation and discipline from the beginning, which is a big reason they are still together.

They performed in weddings and areas around JB and practiced every week -- sometimes all day into the night. Dato's father supported the band wholeheartedly and even designed a custom guitar for the band.

Soon after they formed, they went to Singapore and recorded a split EP with the late great M Osman at his invitation.

This year, March 25, 2011, marks the 46th consecutive year that this incredible band has been in existence.

I had the honor of accompanying this band with Dato A Rahman Hassan and Datin Azizah Muhammad last summer to JB (where the band was formed) to hear a practice session with the full band. I will never forget that afternoon spent with one of the most legendary Pop Yeh Yeh bands in history.

Hearing the band play live, in a small, private studio, was an incredible experience for me. In the moment, I could hardly believe I was actually there. But it definitely happened, and some of the footage from this session will be included in the forthcoming documentary which I am still very busy editing!

Today, this band is the very center of the Pop Yeh Yeh community, carrying on the tradition for young and old. Orkes Nirwana recently performed at the most recent Pop Yeh Yeh reunion concert to a sold-out audience in JB a few months back. They did all of their hit numbers and also served as the house backing band for all the other great Pop Yeh Yeh artists in attendance. Dato' himself is the primary organizer of concerts like these, which often benefit charitable causes, and also serve to introduce younger generations to this inspiring tradition of great Malay pop music.

Thanks again to Orkes Nirwana for sharing the music over the years!! May they continue for many more to come!