Besides listening to Malay Pop from the 60s and 70s, I've also been a huge fan of Indian music over the years. And I think what might have drawn me in initially to Malay Pop was the fact that there were and still are so many cultural influences present in Malaysia... especially in the music (and food for that matter).

As the Pop Yeh Yeh era sort of faded out near the early 70s, many groups changed their sound with emphasis on Indian and Indonesian influences.

But I understood none of these nuances and shifts in style until my friend Ghaz generously highlighted the different bands, singers, recording labels, and hit songs of the era. The history that I learned from people like Ghaz and Joe Pereira has helped me to recognize different trends that were happening in Malay Pop during the 60s, and on to the 70s.

Some of the first Malay EPs I ever heard were by artists like Sanisah Huri, Zaleha Hamid, Sharifah Aini, and DJ Dave.

Coincidentally, what probably made these records so accessible to me at first was the fact that all of these artists were incorporating Indian instrumentation into their songs (I was already an avid listener of Bollywood film soundtracks when I first started checking out Malay Pop - and the cheapest EPs I could find were the 70s artists on bigger labels like EMI and LIFE records).  Pop Yeh Yeh gave me even more of a thrill when I started to get my hands on the older EPs, but I will always have a love for the artists I mentioned above too.

Yes, some of the production of the 70s sounded a bit overly produced, and the "edge" that Pop Yeh Yeh had was replaced with swirling string sections, tabla, and brass sections - but the subtle beauty in the songs of the 70s is a whole other world to be appreciated.  Especially the period coming out of Pop Yeh Yeh (1970-1975 maybe). These years are also coincidentally thought by many to be Bollywood's greatest years - so it makes sense that Malay musicians were turning to Indian music for inspiration.

But let me stop there and allow Ghaz to take over the post from here. In the following short essay, Ghaz focuses on two very important "trendsetting" groups who truly exemplified the fusion of styles I have mentioned above.....

At the end of last month, I was in Langkawi on an official assignment. After the meeting was over, I prepared myself to have a bath at the resort's seaside. While doing so, I turned on the Malaysian channel TV3 on which I saw that the 1964 Hindi film Sangam (Unity) was aired.

The movie made it at the box-office in Malaysia, including the province of Singapore as it was called then. I could still recall that my Dad told me how popular the film was, until he watched it five times in different cinemas! I remember that in one of the Malaysian general elections, Sangam was aired by the government channel RTM while waiting for the polling results were released one by one, in the wee hours of the morning. I was not surprised at all, as usually a classic Hindi film has a long duration reel play of an average of three hours .... hehehehehe!


Somehow, a Malay 60s band was formed as "The Sangam Boys", under the initiative of the singer, Halim Yatim. The band was led by A. Aziz Abdullah. I believe that the musicians were taking advantage of the popularity of Sangam, hence leading to the choice of such name. Halim Yatim and The Sangam Boys cut quite a handful of EPs. I love the songs by them, among the popular ones include Jandaku (My Ex-Wife), Jauh Pandangan (Far-Sighted), Gadis Pontian (The Girl From Pontian), Nasib Wanita (A Woman's Fate) and Saya Ta' Suka Awak Ta' Tahu (I Dislike You But You Don't Know).


The Sangam Boys then backed up other singers like S. Roha, R. Selamat, Kamariah Ahmad, S.H. Abdullah and Hussain Marican. Beginning with these singers, the band injected a new approach in their music style where they recorded current Hindi songs in Malay. Coincidently, by this time, it was the late 1960s and early 1970s - the trend of cover versions. This approach is indeed proven a success where their records sold well in both sides of the Causeway.


Eventually, the same approach was adopted by other emerging bands who tried their luck by jumping into the bandwagon. Next came another band called Orkes Zindegi. (Zindegi means Life in Hindi). Among the earliest singers include the Tayib Ridon (a.k.a Singapore's Mohd. Rafi), and late Sharifah Noor (a.k.a. Singapore's Lata Mangeshkar). My Dad used to have Sharifah Noor's 1970 EP with this band with the songs Salabat Laila and Di Mana Bahagia (Where Is The Happiness) recorded under Sea Lion Records. Orkes Zindegi then provided musical backups for Zaleha Hamid, Samsar Begum, Rajesh Khan and other singers performing similar genre.


A few other bands listed include the late M. Shariff (Malaysian Fenderman) and his band The Zurah, who had played a significant role in reviving the pop-yeh-yeh craze, and Kamariah Ahmad with Orkes Brahmachari. Shariff himself had an opportunity to work with Hindi composers to cut an album in India.


Meanwhile, there were other group performing the same music, such as The Dosti Boys (featuring K. Jeeti and S. Rosli), Orkes Anjaana (featuring Mohamad and Jimmy Ekbar), but their popularity was minimal.


An exciting fact  - Brahmachari and Dosti were also popular Hindi films which hit the charts in Malaysian and Singaporean box-office in the mid-1960s, too.


The salient feature of this kind of music is that it runs well not only to the pure Malays but also to the Jawi Peranakans (Malays with Indian Muslim or Arab blood). The music were played in social gatherings, most of the time on weddings. The Malay community accepts Hindi songs and films partly because Malay and Hindi share many words in their vocabulary, which originates from a mixture of Sanskrit, Arabic and Persian. 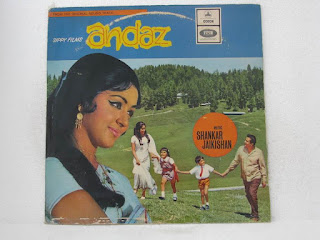 (above: Shankar Jaikishan's "Andaz" Soundtrack which includes the song "Zindagi Ek Safar Hai Suhana" - once covered by Zaleha Hamid in the 70s backed by Orkes Zindegi)


Before the pop-yeh-yeh came into the picture, many Malay singers of the 1940s and 1950s such as R. Azmi and siblings duo Razak & Zainab Majid adopted the Hindi style into their renditions, thanks to the influence of Indian film expertise into the making of classic Malay movies where their songs were included in the soundtracks.


Although the Hindi-Malay bands no longer fit the present trend, the interest to Hindi films and songs has never ceased to grow. This is the uniqueness of the multicultural populations of both Malaysia and Singapore where everybody accepts each other as they are.