Malaysian Airlines postcard from the 70s 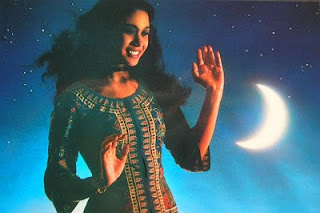 I'm not sure if you've seen the awesome press coverage my project has already gotten in Malaysia and Singapore, so here are some links:

Radio Interview with Shefah on "That Music Show" on BFM in Petaling Jaya, Malaysia.

And here's a link to an article featured in Style Weekly (Richmond VA, USA) about a DJ gig I did at Balliceux featuring all Malaysian and Singapore 45s.
Posted by DJ Carl Hamm at 7:41 AM 0 comments 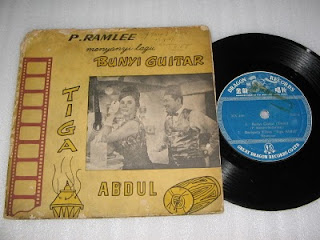 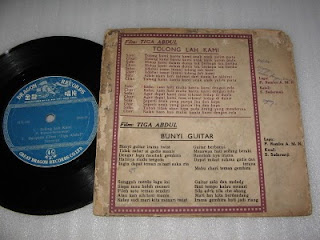 P Ramlee remains the most highly revered, and legendary of all Malaysian Pop musicians and composers, and his music is considered by many as the truly "classic sound" of Malaysian pop music.
Posted by DJ Carl Hamm at 6:30 AM 0 comments 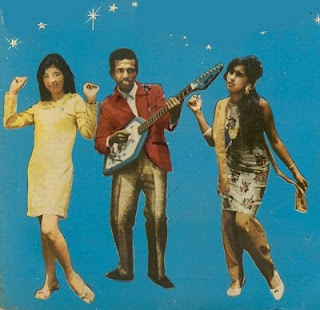 The incredible attention my project got from the blog my sister Xeni posted on BoingBoing definitely kicked my Kickstarter project into high gear! Thanks so much Xeni!!

Kickstarter is a truly brilliant website. Many thanks to Kickstarter for providing a powerful means to get my idea out to the world and for helping me raise funds for this project.

Of course, the whole idea of travelling to Malaysia and Singapore is really something that came out of many late night discussions with Sublime Frequencies co-founder Alan Bishop.

I should also say that there are many people in Malaysia and Singapore (who I will formally thank in the future but wont name specifically here) who have shared so much information with me over the years - providing translations, rough bios of artists, context, and encouragement of my research. Thanks to all of you. Terima Kasih Banyak-Banyak!!

And most importantly, thanks to all the friends, family, and complete strangers who generously supported my dream by becoming backers of my project. I am so grateful to all of you for giving me this opportunity.

Last but not least, thanks to WRIR for being the best radio station in the world and allowing me to share my eclectic musical tastes with the world.
Posted by DJ Carl Hamm at 6:22 AM 0 comments

The idea for this project began years ago, when i bought my first Pop Yeh Yeh 45s

I was buying lots of records back in 2002. I guess I was just starved for more culture. I had just moved back from New York, which is a place where you can explore endlessly.. and learn so much about the many cultures of the world. I spent several years there - and thankfully, it really opened my perspective. When I moved back to Richmond (for a dozen reasons I won't go into here) I just needed to keep learning, so I started ordering records from different countries (I mean, actually ordering records from their countries of origin). I bought vinyl from Nigeria, Ghana, D.R. Congo, India, Hong Kong, Thailand and Indonesia. Then I got a hold of some records from Singapore and Malaysia.

The first few 45s of Singaporean and Malaysian music were just random selections that I purchased based on the colorful looking "psychedelic" covers. I knew nothing about these artists. I just bought a couple at a time with my limited budget every few weeks and paid the shipping to get them here.

The first records that really struck a chord with me were Zaleha Hamid, Salamiah Hassan, Wiwiek Abidin, Hamidah, Junainah, Elmi Salleh, Sharifah Aini, and Rahimah Rahim. These weren't necessarily "Pop Yeh Yeh" records. Most of them were recorded later on in the 70s - a transitional period that was developing out of Pop Yeh Yeh into another style, as more modern Disco sounds began to take hold. A lot of these artists were then signed to LIFE and EMI record labels. Something about the melodies and rhythms of "Pop Melayu" was incredibly beautiful to me- the mix of electric and traditional instrumentation, and the singers had such incredible voices. Some of my friends at work used to joke that I was spending more on Malaysian and Singapore records than I was spending on groceries. That wasn't far from the truth. I couldn't get enough of it, I was hooked on this sound.

I later found records by Adnan Othman, Zam Zam, Zahren and Mahani, Noor Hamza, M.Y. Shamsuddin. then, still later on S Roha, J Kamisah, Fabians Boys, Norazizah, The Swallows, Les Kafilahs, Salim I, the Hornets, the Rhythmn Boys [sic], Maria Bachok, L Ramli, the list of artists to discover was, and still is endless. In my search for the roots of this music, I also found out about an even earlier sound from the Golden Era of classic Malaysian film music... the music of P Ramli, and Saloma.

It seemed to me that the further back I went, the more I was mesmerized by this incredible music. I wasn't just drawn to the rockin' psychedelic stuff.. but also the beautiful Malay folk ballads - "Asli" songs they are sometimes called. I have tried my best to take in all of these sounds with the ears of someone who originally knew nothing about this genre. And I have spent years finding out more and more about the artists I like best.

I love the way the Bahasa Melayu sounds.. especially when sung. It's a very musical language. And I love the fact that there are so many cultural influences in Malaysia and Singapore -- Malay, Chinese, Indian, Indonesian, Arabic, Western, Spanish. All of these cultures can be heard in Malaysian Pop music. Of course, I've always really wanted to know what they were singing about too. And with generous help from friends I've met online in Singapore and Malaysia, I've actually managed to get some of the song titles translated.

After all these years of collecting and learning, I am now about to embark on a trip to Singapore and Malaysia to find out the real story behind this music. One goal of my trip is to find the artists who made this music, interview them, and ask them to share some of their memories. I hope to create a compilation of my favorite songs from this era, and a documentary from the video footage I take while I'm there. I want people all over the world to fall in love with this incredible music. For those who already know about Pop Yeh Yeh, I want to try to help preserve some of the history of this era in a creative and inspiring way.

As much as I have built this up over the months leading up to my trip, I know there are still many obstacles that I will have to overcome in order to make all of this happen... so wish me luck!! I leave in two days and I'll be there for three weeks.

I'll be posting photos and stories on this blog during my trip - so keep an eye on this page!
Posted by DJ Carl Hamm at 5:11 AM 0 comments

check out some more tunes by M Ishak and the Young Lovers over at Garage Hangover.
Posted by DJ Carl Hamm at 11:23 PM 4 comments

Email ThisBlogThis!Share to TwitterShare to FacebookShare to Pinterest
Newer Posts Home
Subscribe to: Posts (Atom)
The first POP YEH YEH RESEARCH TRIP TO SINGAPORE AND MALAYSIA took place in the Summer of 2010! (see Kickstarter project and amazing help from Boingboing )