S Mariam and the Rhythmn Boys - all english songs EP 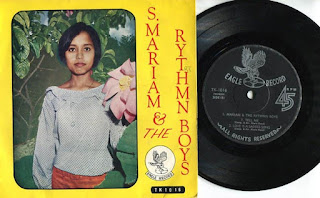 dont have this one... but it would be nice to hear it someday...

"By the way, I'm happy to see the image of the English album by S. Mariam & The Rythmn Boys. If you managed to get a copy of the record, you will be surprised to see that at the back sleeve, The Rythmn Boys were featured with A. Ramlie. 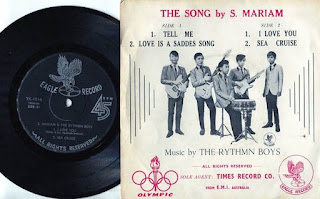 I wonder why Ramlie was included. Moreover, despite being English-educated, Ramlie had never recorded even an English song throughout his career. I suppose that the publisher (Eagle Records) would like to promote his next album, and this could be the cheapest mode of advertisement."

"The Rythmn Boys had been backing up many 60s artistes those days. Besides A. Ramlie and S. Mariam, the band also accompanied M. Amin, S. Ahmad, Ramlah Aziz, Sha'ari Omar, Novell, Adnan Othman. A. Rhymie and G. Yusof. Besides, the band also appeared on two Malay films - A-Go-Go 67 (with S. Mariam) and Dosa Wanita (with A. Rhymie) - both released in 1967 by Shaw Brothers' Malay Film Production and Cathay Keris respectively.

I propose that if you have the collections of Pop Yeh Yeh albums in your possession, try to make CD-box set of this band featuring the artistes as mentioned above, as they were among the popular bands backing up many vocalists, each of which had lat least one or two EPs under them. I recommend you to take up this challenge, as I believe that it would turn out to produce good results.

I dedicate this writing to the lead guitarist of the Rythmn Boys, the late Mohamed Ayob Taib, who passed away in Singapore 2007 at 59 of dengue fever. May Allah bless his soul forever - Ameen.