Today, I am happy to share some very interesting information (beginning below the map image) sent to us by our favorite guest blogger, Ghaz, about a question that has always interested me... What about Eastern Malaysa? weren't there bands from other parts of Malaysia besides Western Penninsular Malaysia?

Before sharing Ghaz's essay, I'll start by saying that the answer, of course, is YES.... Pop Yeh Yeh and the 60s kugiran style spread throughout Malaysia - including the eastern areas of Brunei, Sarawak, and Sabah.  The history of these areas is complex and I need to do more research to put any of that story together, but currently, the following information is apparently true (according to Wikipedia):

Brunei is actually a sovereign state, but 66% of its population is made up of Malays : "In 1888, Brunei became a British protectorate and was assigned a British resident as colonial manager in 1906. After the Japanese occupation during World War II, in 1959 a new constitution was written. In 1962, a small armed rebellion against the monarchy was ended with the help of the British. Brunei gained its independence from the United Kingdom on 1 January 1984." .... "Brunei's small, wealthy economy is a mixture of foreign and domestic entrepreneurship, government regulation, welfare measures, and village tradition. Crude oil and natural gas production account for about 90% of its GDP. About 167,000 barrels (26,600 m3) of oil are produced every day, making Brunei the fourth-largest producer of oil in Southeast Asia. It also produces approximately 25.3 million cubic metres (890×106 cu ft) of liquified natural gas per day, making Brunei the ninth-largest exporter of the substance in the world" (from Wikipedia).

Sarawak is situated on the northwest of the island, bordering the state of Sabah to the northeast, Indonesia to the south, and surrounding the independant state of Brunei. (from Wikipedia).

Sabah is Malaysia's easternmost state, one of two Malaysian states on the island of Borneo. It is located on the northern portion of the island of Borneo and known as the second largest state in the country after Sarawak, which it borders on its southwest. It shares a maritime border with the Federal Territory of Labuan on the west and with the Philippines to the north and northeast. (from Wikipedia).

Here's a map for clarification. 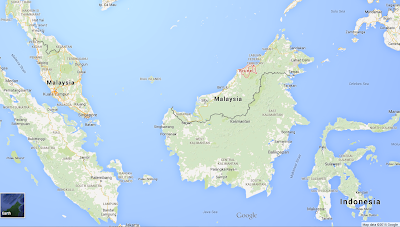 The following Essay was sent by Ghaz.  I always appreciate his talent and skill in clarifying the complex musical history of this era: