Our favorite guest blogger, Ghaz, continues with more colorful stories and history about Malaysian and Singaporean music - and specifically Malay music from those countries - during the 60s, 70s,  and all the years before and after!


We hope you enjoy this fascinating article below from Ghaz in Kuala Lumpur where he discusses the phenomenon of "Malay cover versions".

In the mid-1990s when I was still a student of an international university in my country, I used to listen songs by the late Ismail Haron (1946 - 2012) a.k.a. Singapore’s Tom Jones at my campus dormitory. Well, in actual fact, I was introduced to Ismail’s songs for the first time after browsing through a collection of records owned by my classmate’s father during my visit to his house in 1987. I was only 13 years old then when we got to know each other, by attending the same boarding school. It took me about 10 years until I eventually decided to get a copy of Ismail’s compilation album out of curiosity, just to learn how his voice sounds like!

One of the unique features of his songs is that many of them are adapted from current English songs of the 1960s originally recorded by Tom Jones himself and Engelbert Humperdinck, or any other singers whose voices are in resemblance to both. Nevertheless, Ismail manages to inject his own style of singing until one hardly realizes that his songs are actually cover versions.

After conducting some research of my own, it was found that there used to be a trend whereby many of the Malay artists tend to record many of English, Hindi or Japanese songs with Malay lyrics. Although the practice has been in existence since 1950s, it grew rapidly beginning the late 1960s, particularly after the May 13 racial riot, and lasted until the late 1970s.
I can still remember one of the songs by the late R. Azmi (1923 – 1974) which resembles that of a Spanish tango. The title of the song is Memikat Hati (Capturing My Heart), recorded somewhere in the early 1950s. It was a big hit in Malay-speaking territories and Indonesia.  However, Azmi preferred to sing Hindi songs in Malay instead of those originally in English, perhaps due to its suitability to his mood and temperament. Other singers from the said decade who share the same approach as Azmi include sibling duo Razak & Zainab Majid. 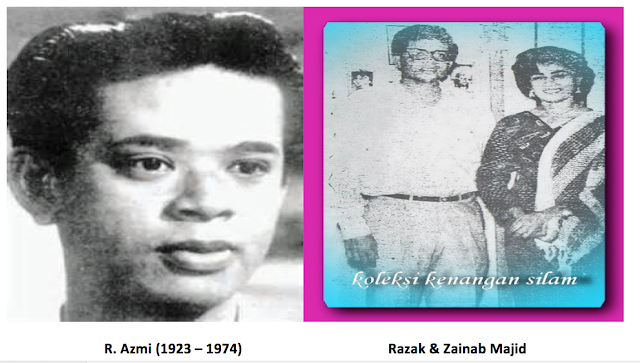 (Original song: Deewane Ka Naam To Puchcho from the film An Evening In Paris)

… while their peers such as Eddie Ahmad, his sister Hamidah, Rahimah Rahim and others recorded mostly English songs in Malay. 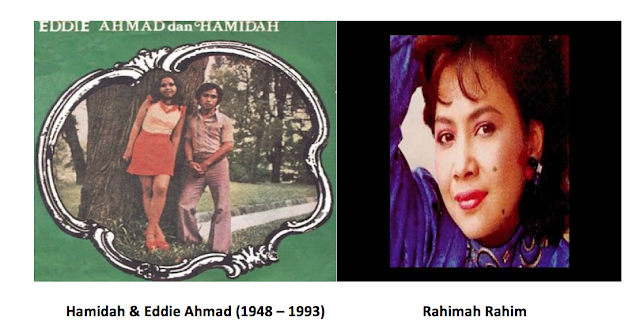 There are a few of them who recorded Japanese, Mandarin and other East Asian-language songs in Malay, too like Rafeah Buang, J. Mizan and the late Rahman Kadir.

There is no exact theory on why cover versions were made available those days. One could be that these songs were recorded following a growing demand from listeners who had always wanted Malay songs be further transformed by imitating the originals from both east and west. Some of the cover versions did have been well-positioned in the Malaysian hit charts, such as Ismail Haron’s Enam Belas Lilin (his Malay version Sixteen Candles) which remained in the charts for 15 consecutive weeks in 1968.

Another theory could be that cover versions were done as a medium to unite the people of Malaysia and Singapore from different ethnicity through music, which has always been regarded as a universal language. In the 1960s, people from both sides of the Causeway had experienced the aftermath of racial riots (July and September 1964 in Singapore; May 1969 in Kuala Lumpur). As such, efforts had been put up by various quarters to cool them down by promoting racial harmony, learning and accepting each other despite many differences, by which music was found to be an effective tool for such purpose. When songs from different languages were re-recorded into another group of different languages and then became top hits on the charts, this was indeed a good sign where listeners from different ethnic and cultural background began to appreciate the work of art of the others and enjoyed them together with their peers.

However, such development in the entertainment industry remained to be closely monitored by the Malaysian Government. In 1969, the Copyright Act was made into force, with the objective of curbing record and film piracy, besides ensuring that all copyrights are properly reserved. Meanwhile, there had been growing concerns among the entertainment industry players on the lack of creativity of local composers and songwriters resulting from too many cover versions flooding into the music market. To make things worse, issuing and circulating cover versions had been highlighted by certain quarters as an infringement of copyrights, hence leading to the possibility of legal suits by the owners of the creative arts from their countries of origin. Eventually, after careful consideration on various opinions over this issue, cover versions were banned from being aired on Malaysian radio and TV shows in 1979.

In spite of tight control, cover versions still continued to be published years after. I wonder why. During my childhood days in the mid-1980s, I could still recall how Michael Jackson’s Beat It being re-recorded in Malay by a Malaysian comedian as Bidin, Kenny Login’s Footloose became Fulus (Money in Arabic, which is also uttered in colloquial Malay), Inner Circle’s Sweat (A La La La La Long) became Saman (A La La La La Tok) [Saman = Summons] and others of similar nature. I believe that songwriters and performers were trying to include some elements of humour, which deviates from their previous songs which usually bore serious love theme.

I think the relevant authorities had become a little bit lenient when they allowed Lobo to re-record P. Ramlee’s Getaran Jiwa into English as Whispers In The Wind back in 1993. Otherwise, his rendition would have been banned too.

Lobo – Whispers In The Wind https://www.youtube.com/watch?v=YGIy8pSZw00

As midnight is approaching, that’s all for now, folks. Before I go to bed, I leave you with the Malay version of Steam’s Na Na Hey Hey Kiss Him Goodbye. Till then, have a nice day ahead. Bye!

(NB: This article is dedicated to my 1987-batch classmate Wan Mohamad Nadzri, ex-student of Class One Red, Federal Religious-Type Secondary School in Labu, Negri Sembilan, Malaysia. We had lost contact after he transferred into MARA Junior Science College at Jelebu in the same province. I hope that we could keep in touch after he read this article.)

from Carl (Dj Carlito) in the US:

This blog and research project would not have existed without people like Ghaz who are willing to share the knowledge about this incredible cultural heritage - Malay culture!  Terima kasih, Ghaz. I really enjoyed reading this article and I know everyone else who reads this blog will too.


A note to our readers :  We welcome blog submissions for this blog from anyone who's got something to share about Malay music in the 60s and 70s.  Whether you're an artist or a fan or someone who grew up with this music and has some stories to share.  This site is all about collecting info about the golden era of kugiran guitar bands in Malaysia and Singapore, as well as all the music before and after that.    Feel free to get in touch! Just click my profile - DJ Carlito - to email me.  no sp@m please though,  Thanks!