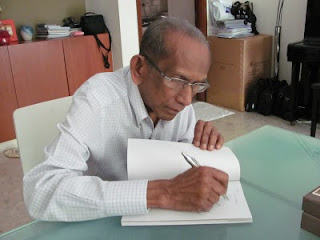 Yusnor Ef has been incredibly prolific over the years. He studied scriptwriting and score composition initially with Tan Sri P Ramlee, who he maintained a friendship with throughout the iconic director and composer's life. In his youth, Mr Yusnor Ef was a huge fan of Tan Sri P Ramlee, and was determined to meet him, which he did, and soon their relationship grew to a sort of apprenticeship, as well as a lifelong friendship. From the moment he met P Ramlee, his whole life changed.

Previoiusly he was working as a school teacher. As a songwrited, his personal life played a huge role in the lyrics he wrote throughout his career. He told me that most of his songs over the years were inspired by his love for his wife (and the great lengths he went to to gain her attention before they were married). Yusnor Ef is a true romantic, and that's why his songs have such a timeless beauty and appeal to them. Songs like Gelisa (Sung by Ahmad Jais), and Normila (sung by Ahmad Daud), both written for his wife, are excellent examples of his endearing romantic style. Gelisa is a sad song written about feeling rejection from a girl he loved. Normila is a song about young lovers - the title is a combination of his and his wife's name (M Nor M Yusofe, his original name, and his beloved wife, Jamila).

Once he started writing songs, his notoriety and fame grew impressively over the years. To date, he has written over 250 songs in his career which have all been recorded by the most famous Malay Pop Artists - these artists include Saloma, the late A Ramlie, Rahimah Rahim, Elmi Salleh, Sanisah Huri, Milah Hussain, Junainah, Ahmad Jais, Ahmad Daud, Maria Bachok, A Romzi, Rafeah Buang, Sharifah Aini, and many many more.

Today I had the incredible fortune to meet Mr (Encik) Yusnor Ef for lunch, and we talked for a few hours about his extensive career. At 72, he still keeps a very busy schedule and has three presentations this week alone to discuss Malay music, film and culture. He explained to me that he can't slow down and wants to keep giving and sharing his knowledge, "when you're gone, you're gone, that's it -- and if you don't share your knowledge, it's lost". I feel incredibly privileged to have been able to meet him today. He was very excited about my interest in Malay music and speaking with him over lunch at his favorite halal lunch spot was an incredible experience.

He has invited me to one of his talks at the National Library of Singapore on July 10th. He also took me to his house, where these photos were taken, in his living room -- and gave me a signed copy of his new box set (he's signing the booklet above), Aku Dia dan Lagu, which compiles 150 of his favorite songs from over the years. The title, translated from Malay means "Me, Her, and a Song"

Mr Yusnor Ef is also a President of a well regarded Music society - Perkamus, and a Director of The Composers and Authors Society of Singapore Ltd , COMPASS.

He has also offered to arrange a meeting tomorrow with several very well known Pop Yeh Yeh artists -- so I cant wait to find out who will show up. I'll certainly have more to report tomorrow. I will be filming a formal interview with Mr Yusnor Ef today at his office here in Singapore. 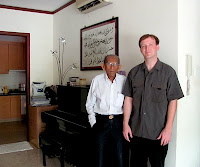 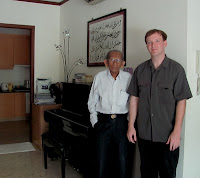