Yesterday, Adnan Othman decided to help me in a major way (again) by hooking me up with some more Pop Yeh Yeh artists who lived in Muar Johor.  We decided to meet them in Melacca instead though.  And we had planned to drive through Seramban on the way back to meet Roziah Latiff also - singer of the Jayhawkers.

However, Adnan's car broke down on the way!!! so we were stranded, and it started getting late so I was really worried that we'd miss our appointments.

We called Joe Chelliah (leader of the Jayhawkers) who lives nearby, and he offered to pick us up and take us to Melacca since he wasnt doing much that day anyway and thought it would be fun to see these other artists and also show me around in Melacca.

Here's a group photo with all the Pop Yeh Yeh legends after we ate Asam Pedas for lunch.

We headed to a hotel to do interviews afterwards (at the suggestion of Joe Chelliah) - what a day!! 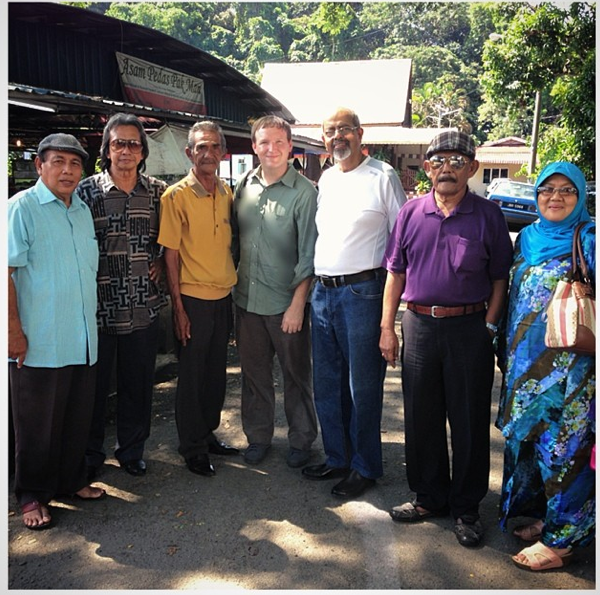 Left to right: A. Halim, Adnan Othman, Zainal Omara, me looking very hot and tired, Joe Chelliah, Husaini B, and A Halim's wife Fatimah in Melaka.

Note:  I tried to erase the sweat on my shirt with my phone although I dont have photoshop here... that's why it looks like a magazine cover Photoshop Fail!    The combination of super hot, humid Melacca weather and super Hot/Sour fish broth caused this -- plus the fact that I was feeling a summer cold coming on, and I was totally stoked to meet these artists.. but the pressure was mounting to interview them after lunch also.

I will post more photos of Melacca (and maybe a few shots of the food) here ASAP!